Shahzad Bashir – Globalizing the Middle Ages: The Market in Poetry in the Persian World 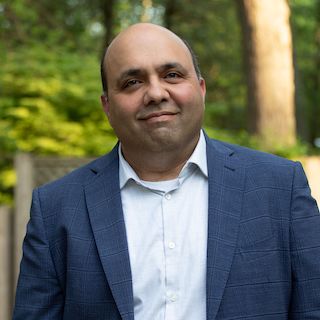 "Poetic speech is a pearl, connected to the king’s ear.” This statement gestures to words as objects of material value sought by those with power and resources. In his monograph, Shahzad Bashir provides a sense for the texture of the Persian world by discussing what made poetry precious. By focusing on reports on poets’ lives, he illuminates the social scene in which poetry was produced and consumed. Eliciting poetry's close connections to political and religious authority, economic exchange, and the articulation of gender, the study substantiates the interdependency between cultural and material reproduction of society.

Part of the Medieval & Early Modern History Seminar series, this event is organized by the Department of History, Center for the Study of the Early Modern World, and Program in Medieval Studies.

Shahzad Bashir is the Aga Khan Professor of Islamic Humanities and a professor of history at Brown University. He specializes in Islamic Studies with an interest in the intellectual and social histories of the societies of Iran and Central and South Asia circa fourteenth century CE to the present. His published work is concerned with the study of Sufism and Shi’ism, messianic movements originating in Islamic contexts, representation of corporeality in hagiographic texts and Persian miniature paintings, religious developments during the Timurid and Safavid periods, and modern transformations of Islamic societies.

He is currently finishing a digital monograph project entitled Islamic Pasts and Futures: Horizons of Time. This is a wide-ranging treatment that critiques the way Islamic history has been conceptualized in modern scholarship and suggests alternatives, with emphasis on the multiplicity of temporal configurations found in Islamic materials.  This project engages contemporary academic debates regarding language, historiography, and history on the basis of materials of Islamic provenance.