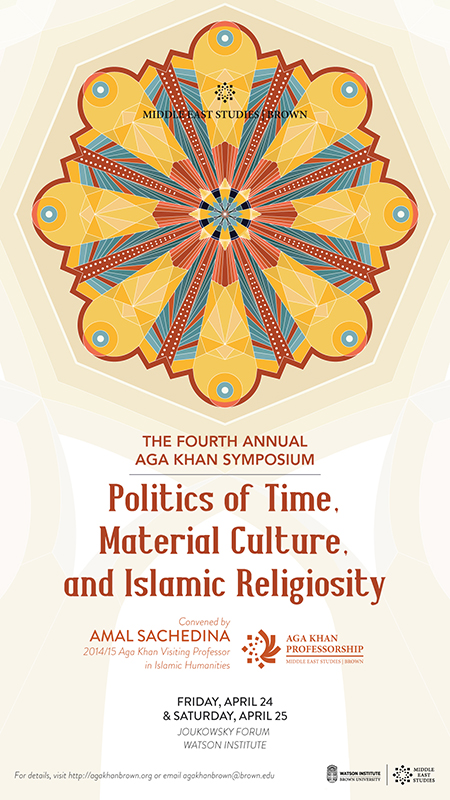 The goal of this symposium is to bring together scholars who work on different regions of the historic and contemporary Middle East and Islamicate world in order to explore how history-making as a modern intervention has transformed the everyday lives of people through refiguring religious and political realities on the ground. It further seeks to interrogate the processes by which material culture, time and Islam as a discursive concept and practice are co-constitutively reconfigured, their institutional possibilities and the dynamics through which such interactions generate multiple temporal experiences of history even while articulating distinctive epistemological, temporal and cultural worlds. In exploring the imagined ends and practical means of these political and social projects of the twentieth and twenty-first centuries, the symposium aims to make disciplinary connections between history, religious studies, comparative literature, archaeology, anthropology, development studies, post-colonial research, heritage and material culture.

Background: Over the past fifteen years, headliners on bloody conflicts and authoritarian regimes in the Muslim world have revolved around historic sites — ranging from the destruction of the giant Buddha statues at Bamiyan, the collapse of the minaret of the Great Mosque at the heart of the old city of Aleppo and the displacement of Ottoman architectural structures in Mecca. These events have generated academic and popular interests alike towards contemplating the relationship between the material past, state and supra-national violence, religion and politics in the Muslim world. In illuminating historical narratives, scholarly debates and interpretations of particular monuments, these studies have tended to view the workings of heritage as the expression of national-territorial, political and cultural struggles and visions. In contrast, this symposium explores ways of critically engaging how modern history-making conceptualizes and categorizes material objects, sites, and images into embodying a certain discursive or visual temporal logic that relates the past to the present and future. It poses questions as to how historicist orderings of objects and imagery generate socio-cultural engagements which draw on the cultural and historical specificity of the Muslim world even while reconfiguring reality on the ground. This general orientation facilitates the exploration of how material objects, images and sites are enfolded into authoritative practices of historicity and time in the twentieth and twenty first centuries in ways that question the naturalist assumptions of the linearity and developmentalist trajectory of the modern nation-state. Set within the common ground of material culture and time, the event will hone in on two interrelated themes. The first will explore how material forms structure our relationship to the past in the process of making distinctive in/visible communal boundaries, social ties and relationships. The second examines how shifts in the histories of material fragments may in turn reconfigure the place and practice of Islam.

Material Culture, Time and In/Visibility: The tactics of history making and its material products have become integral towards securing the parameters of political and religious belonging. Time and its temporal dimensions have tied together issues of governance, knowledge production, memory and authority. Over the course of the 20th and 21st centuries, across the Muslim world (historical and contemporary), the roles and contexts of monumental structures ranging from the mesquita-cathedral of Cordoba to the medieval Islamic centres of Cairo, Damascus and Sana’a, ancient pre-Islamic sites such as the Bamiyan Buddhas, pilgrimage sites such as shrines to Sufi saints, prophets or exemplary figures from early Islamic history, iconographies that instantiate the parables of Karbala, sacral relics such as the footprints of the Prophet, old shari’a manuscripts and daily artefacts have been displaced only to be redefined and re-configured as the result of shifting colonial and postcolonial conditions. How have these material remains become sites for political, epistemological and ethical struggles in the course of modern statehood and aspirations towards global legitimacy? How have institutional strategies of public visibility or concealment fashioned the space and boundaries of temporal, religious and communal belonging? The very efforts in which these object fields come to be constructed, it is argued, involve gaps and fissures that make way for the recognition of contestations at their core. How do the historical sensibilities and attitudes produced through the sedimentation of these temporal rationales, open up alternative experiences of time and temporality that move beyond the linear density of “homogenous empty time”?

Material Culture, Time and Islamic Religiosity: This theme engages with exploring heritage as an active process that imbricates material forms in ways that open up new configurations in context based relationships between politics and Islamic religiosity. In particular, the symposium will explore how regimes of historicity, embodied in these material forms, have been integral towards the ongoing formulation and debates on Islam, its past, material practices, concepts and institutions. Issues at stake here are how acts of construction, preservation as well as destruction of material culture intersect with the differing ways in which relationships to time are translated. This topic thus pertains to questions of how an orientation towards the material past in the 20th and 21st centuries becomes constitutive of the transformative nature of Islamic discursive tradition and the ways it assumes practical and embodied forms of knowledge and life-worlds. In the context of such a discussion, this theme will take up the following questions: How do institutionalized temporalities of historical engagement relate to mechanisms of power and authority? How does focusing in on material objects, sites and imagery and their temporal contexts problematize the idea of religion as an autonomous sphere? How do differing ways of organizing and perceiving historical experiences formulate new possibilities in the relationship between religion and politics?